N is the most powerful letter in the Hyundai alphabet, and only their top cars get the honour of having an “N” badge.

N cars offer the best tech and engineering that the company has at its disposal, and they are developed by the specialised N department.

Since the N department’s establishment in 2012, they have released three fully-fledged N vehicles, with a few N Line variants sprinkled in between.

In South Africa, however, we have only received the i30 N hatchback so far – with the Kona N on its way.

Below, we take a look at the N cars which are not available locally.

The fastback is a slightly-longer version of the regular hatchback, with a bubbled rear.

It has a longer wheelbase with a separate boot, but it is not a true sedan.

It reminds one of the BMW 2-series GT models, only with a much improved look.

The design is quite striking, and I can definitely see a market in South Africa for wallet-friendly “hot fastbacks”, as prices for the European versions of these cars have gone through the roof.

The interior offers a dynamic atmosphere, as it has been given the full N treatment.

In terms of power, you get a 2.0-litre, turbocharged engine that generates 184kW and 353Nm of torque.

This can be enhanced through the “performance package” which bumps figures to 202kW, while adding a corner-carving differential, a variable exhaust valve system, and 19-inch Pirelli P-Zero tyres.

A six-speed manual transmission with rev-matching features controls it all, and 0-100km/h acceleration is done in 6.2 seconds. The Elantra N Line is based on the newest-generation Elantra, which was unveiled in late 2020.

The entire car has been redesigned to look more modern, with a hefty addition of angles and accent lines – but the N Line option takes this further.

It gets N-exclusive 18-inch wheels and sleek side sills, twin exhaust pipes, and glossy black side mirror covers.

On the inside, there is red contrast stitching in addition to sporty leather bucket seats and an N-exclusive steering wheel with extended shifter paddles.

The redesigned cockpit features a gallery of screens behind the steering wheel, and Hyundai chose a rather unorthodox spot to put the drive mode selector button – on the left of the instrument cluster.

When it comes to the engine, it becomes clear why the Elantra is only an N Line and not a full N.

Under the hood lies a 1.6-litre, turbocharged petrol engine capable of generating 150kW and 265Nm of torque.

This lets it accelerate to 100km/h in around 7.3 seconds, and puts it in competition with cars such as the Audi A4, BMW 320i, and Lexus ES. 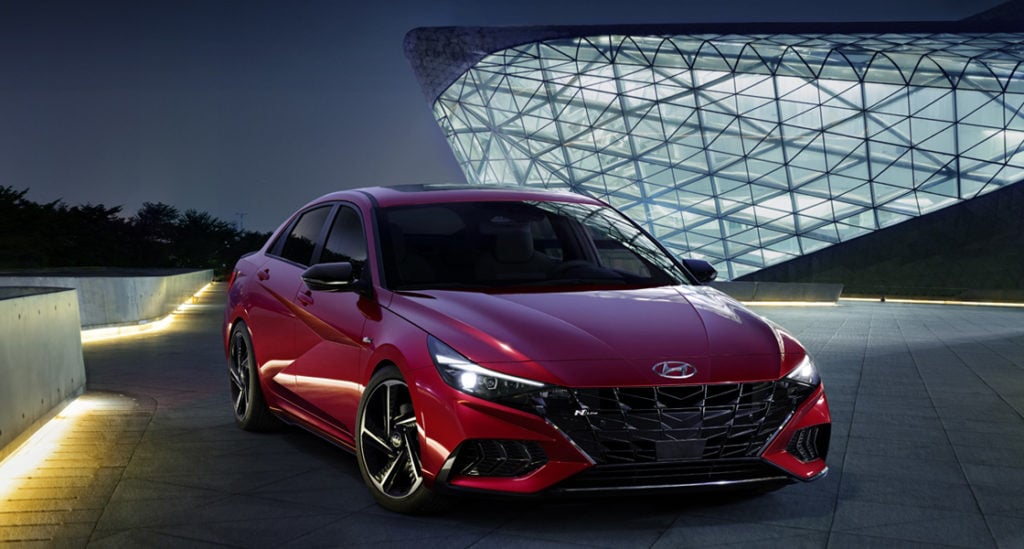 The Hyundai Veloster used to be available in South Africa, and “hot” versions with “turbo” in their names are still available on second-hand marketplaces.

This is the closest that South Africans can get to a hot Veloster, as the true Veloster N is not locally available.

This GTI-competitor is described by Hyundai as being a “corner rascal” and an “everyday sports car”.

The interior is nearly identical to its sibling’s, and the exterior looks like that of the i30 – but with a different rear.

Where the Veloster N lives up to its name is with its engineering.

It is fitted with an 8-speed, wet-clutch, DCT-automated manual transmission that gives you full control over your drive.

This is in addition to the full N treatment inside and out, and the performance package components.

Drive is provided by a 2.0-litre, turbocharged engine delivering 184kW and 353Nm of torque to the front wheels.

It also has an overboost function and comes with N Track Sense Shift – which will “sense” when you are racing, and it will choose the right gear for optimal performance.

What you get from all of this is a hot hatch that accelerates from 0-100km/h in 6.1 seconds, and that has won a most fun-to-drive award.