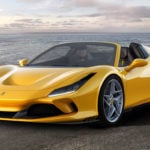 8 facts you need to know about the VW Golf GTI Following the recent launch of the Golf 8 GTI, VW has released eight interesting facts “you need to know” about its GTI range.

VW South Africa has stated that the local launch of the Golf 8 GTI has been delayed to the third quarter of 2021, with the first units of the car arriving in April.

In anticipation of the local launch, enjoy the GTI facts shared by VW below.

VW has kept the Golf GTI’s engine a 4-cylinder unit for multiple decades.

The new Golf GTI can reach an electronically-limited 250 km/h. Each GTI gets a new rim design, which VW said is very important.

“Almost 50% of the overall appearance for a car can be attributed to the rims,” said the company.

Today, over 2.3 million have been built. Designer Giorgetto Giugiaro created the appearance of the Golf, while Herbert Schäfer – design director at the time – installed the red GTI trim strip.

Gunhild Liljequist was then responsible for the golf ball design of the gear knob on the 4-speed transmission.

“This still graces the 6-speed gearbox in the eighth-generation Golf GTI.” VW produced a convertible version of the Golf GTI during the sixth-generation of the line-up.

“The electrohydraulic system opened the soft top in 9.5 seconds, requiring 11 seconds to close it at 30 km/h,” said VW.

“In the months before it was discontinued, the GTI Cabrio was even officially referred to as the most powerful open Volkswagen. “Your personal trainer recommends 30 minutes of exercise every day. It’s lucky he didn’t tell you what to exercise with.”

This was a line from the marketing brochure for the 2012 VW Golf GTI Adidas edition.

Only 4,410 units were produced, which featured sports seats packing an embroidered Adidas logo and the famous three-stripe design from the brand. 8 – The first GTI to communicate

The VW Golf 8 GTI , along with the current Golf range, is the first VW production vehicle to be equipped with Car2X communication systems.

“It means that the Golf GTI is not just a sports car, but also allows you to benefit from improved safety features,” said the company.