Audi’s RS Q e-tron is attempting to be the first vehicle fitted with an electric drivetrain, in combination with an efficient energy converter, to win the Dakar Rally.

The Dakar Rally is a two-week event with daily stages that are up to 800km long, and is widely regarded as one of the toughest automotive races in the world.

Andreas Roos, who is heading up the Dakar project at Audi Sport, said what they are trying to do “has never been done before”.

“This is the ultimate challenge for an electric drivetrain.”

Powering the RS Q e-tron are two motor-generator units (MGU), with one on the front axle and the other on the back.

These MGUs are similar to the ones featured on Audi’s Formula E car, with only minor modifications being made for Dakar use.

They are also highly efficient with Stefan Dreyer, Head of Development at Audi Sport, stating that the MGUs have a system efficiency of over 97%.

Audi has stated that the maximum system output of the electric drivetrain is 500kW. However, the organisers of the Dakar Rally are still finalising how much of this may be used. To provide the RS Q e-tron with the necessary range to complete the race, a large battery along with a generator system is used.

The battery weighs roughly 370kg and has a capacity of 50kWh.

Dreyer stated that: “[The battery] is where the greatest development potential lies in electromobility in general. What we learn from the extremely challenging Dakar project will flow into future production models.”

For the generator, an efficient TFSI engine is connected to a third MGU to provide charge to the high-voltage battery while driving.

In addition to a generator, the RS Q e-tron’s regenerative braking system will provide charge to the battery.

To save weight the RS Q e-tron will only have one forward gear.

Further weight is saved through the use of software that serves as a virtual centre differential and controls the torque distribution between the axles.

This also helps free up space that would otherwise be used by propshafts and a mechanical differential.

The Audi RS Q e-tron will go through an intensive testing programme alongside test entries in upcoming cross-country rallies to prepare for the race. 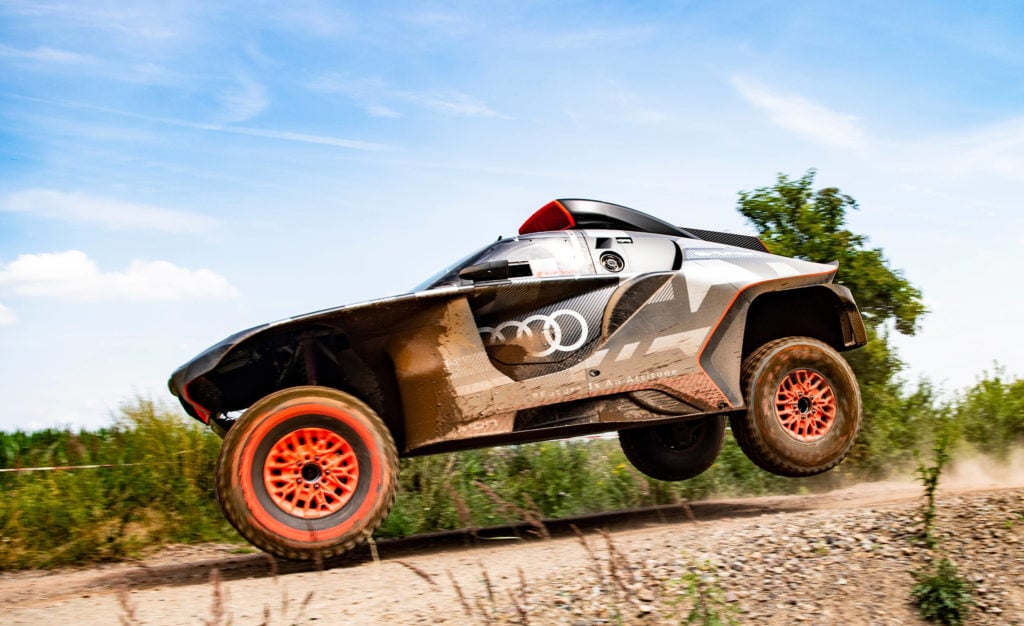