The revised Audi R8 V10 performance quattro will have its official retail launch on 1 April 2021.

Deliveries to VIP customers of the company have officially begun in South Africa as part of a pre-launch strategy, said the company.

Audi has sharpened the look of the new R8 and it now looks characteristically honed.

A sharper front end can be attributed to the wider and flatter singleframe grille, with dimmed headlights and adjoining design elements supporting the design further.

More components that are making the R8 look sportier than before include the new front splitter, aided by the side winglets that split the large air intakes, and slits above the grille that signals back to the original Audi Sport Quattro.

At the rear, the revised R8 also sees a design update.

This comes in the form an air inlet grille spanning the width of the car, a dominant rear diffuser, and new oval exhaust pipes.

The engine compartment gets a new, three-part cover, and below this sits the air filter – which is available in either plastic or carbon specifications.

As standard, the R8 is fitted with a high-gloss black styling package. This sees the front splitter, sill trims, and diffuser all finished in black accents.

Furthermore, the Audi rings and badges on the exterior are also finished in black.

If you would like an even sportier look, there is an option to upgrade to the gloss carbon RS package – which turns all the gloss-black exterior components into carbon fibre, except for the  badges.

Additionally, every new R8 will receive LED headlamps and tail lights with dynamic turn signals and high-beam control as standard.

There is then an option to further upgrade these to Audi laser lights.

For the customers looking for a more differentiated design, there is an Audi exclusive program as well, which allows you to have your car painted in any blend of paint colours that you desire.

Two new metallic colours – Kemora grey and Ascari blue – have been added to the paint range, too.

Inside the R8 there is a noticeable focus on the driver, as all key functions of the vehicle can be controlled without them having to take their hands off the wheel.

New options for the interior include the R8 sports seats with fine Nappa leather and diamond stitching as standard – with red, white, or black being the available colourways.

The flat-bottom, multifunction steering wheel is home to all the buttons of the MMI infotainment system – as well as three additional satellite buttons for the engine start/stop function, various drive select modes, and performance programs.

The MMI system and Audi virtual cockpit plus have now been integrated into a single 12.3-inch display behind the steering wheel, said Audi.

This screen is dominated by a large tachometer and can display several pieces of information – such as torque and G-forces.

The MMI operating system and navigation features can also be displayed on the screen, and a flat menu design with rotary push-button, free-text, and voice inputs was chosen.

More notable features of the R8 include:

The Spyder then sees a slightly slower acceleration time of 3.3 seconds.

A top speed of 329km/h is then achievable, which is managed by a 7-speed S-tronic gearbox fitted in every model.

Interestingly, in Performance mode, the gear ratio remains constant above speeds of 140km/h in order to ensure precise handling.

Dry, wet, and snow programmes form part of the Performance mode on the R8, too, and adapt the key dynamic parameters to the friction coefficient of the road.

The new Audi R8 is equipped with 20-inch Audi Sport wheels which are available in two colour options – titanium or matte bronze.

Ceramic brakes as well as red calipers are a standard feature, and the stabilizer at the front axle is optionally made from carbon fibre-reinforced polymer and aluminium, which cuts weight at the front axle by around 2kg.

The new Audi R8 will officially go on sale in South Africa from 1 April 2021.

Along with the design revision, Audi also changed up the naming scheme – and the vehicle will now be known as the Audi R8 Coupé/Spyder V10 performance quattro. 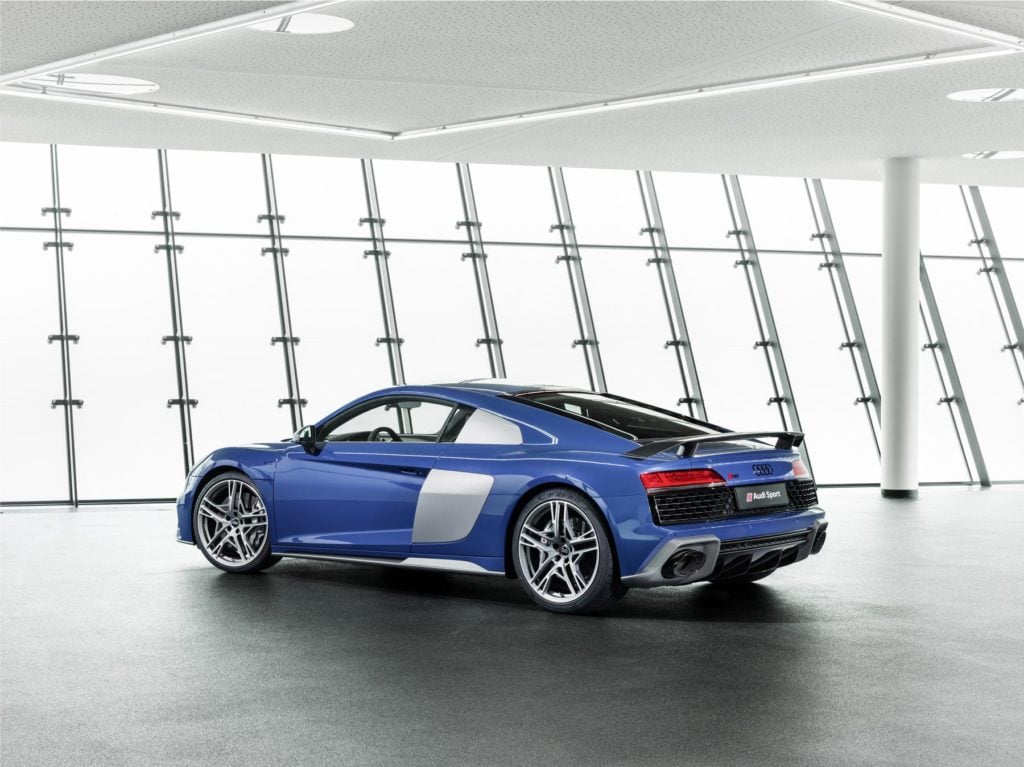 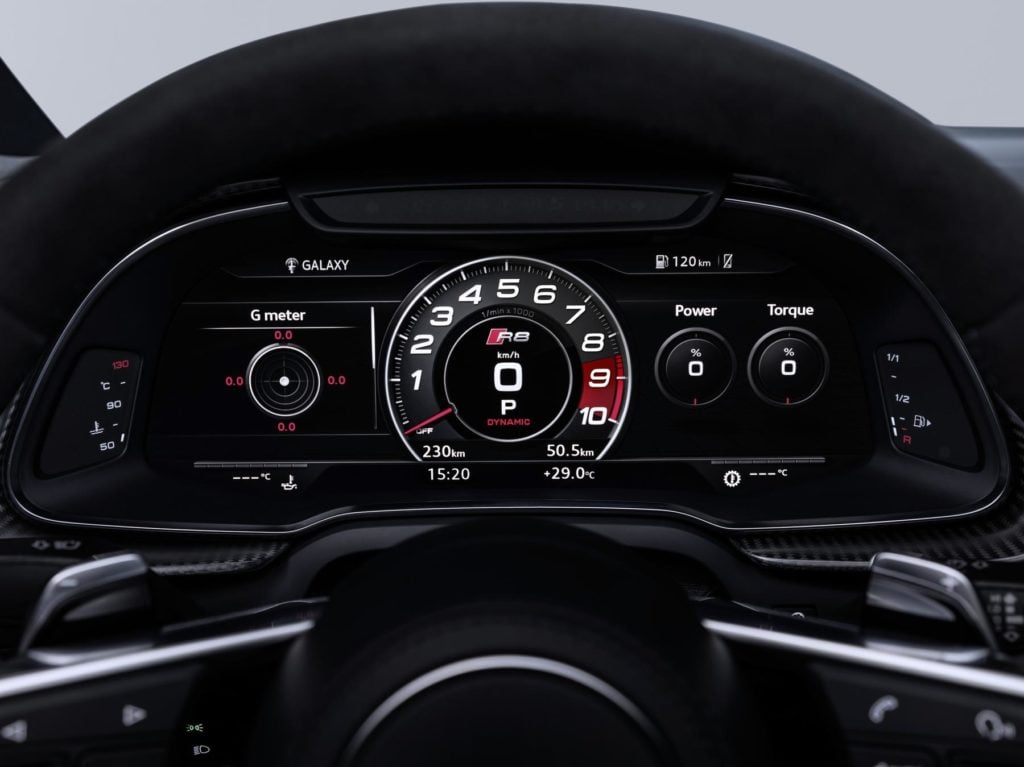 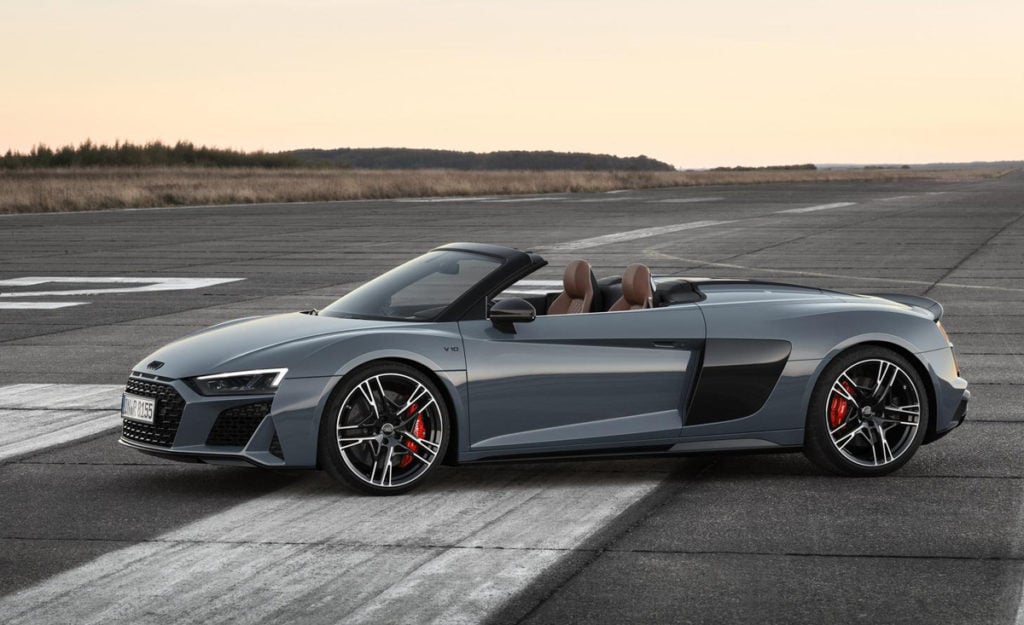