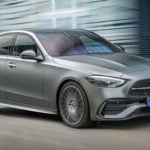 The rear end also saw an update, in the form of a new split tail lamp design and a new boot lid.

Inside the car, however, is where you will see the biggest differences.

Most notable is a new steering wheel with touch controls, two 10.25-inch displays, and the latest generation of the Mercedes-Benz User Experience (MBUX) infotainment system.

Urban Guard is also included, which works in conjunction with the Mercedes Me app and comprises an anti-theft alarm system, and tow-away protection.

The system will also warn the driver of the vehicle, via a push notification on their smartphone, if the vehicle has been moved or damaged while it was parked.

The new E-Class has the latest in driver safety and assistance systems that Mercedes has to offer.

Active Distance Assist Distronic with route-based speed adjustment can recognise and respond to road hazards before the driver becomes aware of them.

For example: When a traffic jam is detected on a freeway that the driver might not be aware of, it reduces the car’s speed to around 100km/h as a precaution.

Active tailback assist has also been fitted, which assists the driver with lane-keeping and maintaining a safe following distance.

Additionally, active blind spot assist monitors the blind spots to warn a driver of any hazards that might appear, and a parking package provides a 360-degree camera to assist you in fitting your E-Class between those white lines.

A new feature called Energizing seat kinetics has also been installed, which moves the seat cushions and backrest on a long journey to improve the driver’s posture. The newest flagship E-Class is the AMG E63 S model.

It differentiates itself by being fitted with AMG seats, an AMG steering wheel, and adjustable ambient lighting.

It also receives the two large infotainment displays, which are huddled beneath a shared glass cover to form the Widescreen Cockpit.

Furthermore, the vehicle’s features can be controlled either through saying “Hey Mercedes” or by adjusting them through the leather steering wheel.

Speaking of the steering wheel, it now features a “hands-on” sensor, which detects if the driver does not have their hands on the wheel for a certain time.

After this it will sound a warning and ultimately bring the car to a halt.

On the centre console you will then find AMG-specific controls for features such as drive programs, media, traction control, adaptive damping, and the reverse camera. It produces 450kW and 850Nm of torque, and is mated to a 9-speed automatic transmission.

For the drift enthusiasts, a drift mode button will let you send all the power to the rear wheels instead of all four – while six drive select programs control the ride on any surface.

The South African pricing for the new E-Class sedan is as follows:

At launch, the South African market will only have the E200 and E220d derivatives to choose from.

An overview of the engine options for the new E-Class can be found below.