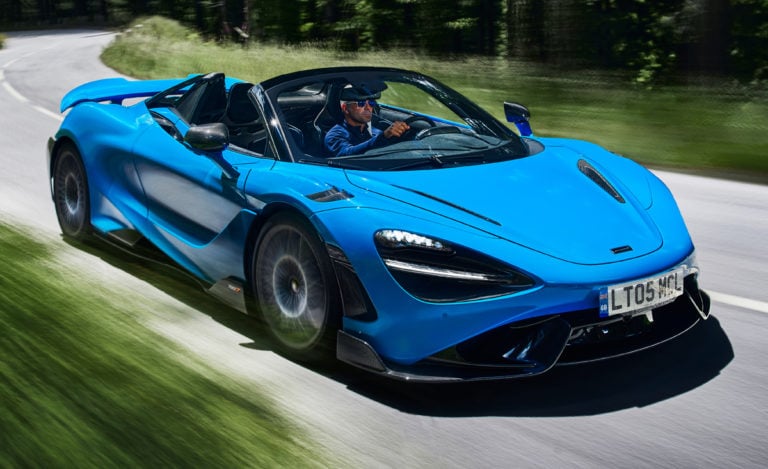 It took me 15 minutes to get out of the driveway yesterday with the 2022 McLaren 765LT Spider.

And that was after the ear-splitting chaos of setting off the car alarm opening one of its winged doors because I had left the key inside the garage.

My driveway meets the road with a subtle divot that belies its precarious nature. Supercars are not able to clear its concrete confines without clever angling and knees-on-the-ground spot-checking as they roll slowly, slowly out of the gate.

I know this from experience. Let’s leave it at that.

But it did call for an extra five minutes to execute an 18-point turn mid-driveway to completely rotate the car so that I could drive its menacing shark nose out first rather than back out like I normally would.

The rear of the McLaren has carbon fiber blades that jut down below it like the underside of a mushroom cap.

These kinds of blades offer lovely air dissipating capabilities, McLaren tells me, but they are as unforgiving as a Scorpio and require thousands of dollars in replacement fees once scratched.

Meanwhile, the front of the car has a lift kit that raises the nose an inch or so enough to clear the pavement, so I availed myself to that. Once pointed in the proper direction, I nudged the carbon-kitted beast forward on an extreme angle to the street at about the pace of a DMV office during Covid.

I searched for, then pushed, a little round button to lift the front hood to store my tote; there is no room for anything behind the two seats, let alone in the footwell, and I did have a passenger with me. (Two minutes.)

I lodged myself in the black cockpit bucket seat with power-adjust buttons hidden counter-intuitively on the right side of the driver’s seat, wedged between the seat and the center console. (One minute.)

I eventually found the round knob under the dashboard that would move the side mirrors and adjusted the rearview mirror so I’d have a chance of seeing LA’s torrid hoards of Prius and Teslas behind me. (One minute.)

I flicked through the infotainment system in search of a Bluetooth connect that would take me away from the horrible Sirius pop radio station the guy prior to me had tuned into. (Two minutes of effort until I gave up.)

That last task I nixed on account of the headache required to figure it out. I had a supercar to drive!

No need to waste more time trying to sync Dua Lipa when McLaren has newly engineered the four tailpipes of the 765LT Spider to proffer a symphony of superfast sounds.

The McLaren 765LT Spider is anything but a fast getaway when constricted to such mundane environments like driveways and parking lots. But once on the open road – or better yet, the open track – its mind-bending speed is enough to alter your perception of what is good and proper in a supercar today.

A quick refresher, since the multi-numbered iterations of McLaren’s product line remain as confusing as ever.

McLaren’s 765LT Spider sits at the top of its “Supercar” group that includes things like the 720 Spider and 720S. (LT stands for, simply, long tail; S means “sport”; Spider means it’s a convertible.)

It is not as extreme as the uniquely named “Ultimate” cars like the multimillion-dollar Senna and Speedtail, but it is far more powerful and aggressive and more menacing to look at than the numbered “Legacy” cars like the 600LT, 570S Spider, and 675LT Spider.

It makes them seem downright tame – and the two guys with a 570 parked in my neighborhood definitely looked like they felt the big energy of the Long Tail when I drove past them the other day and waved.

There are levels to these things, and the 765LT sits near the top of some already extremely rarified air. 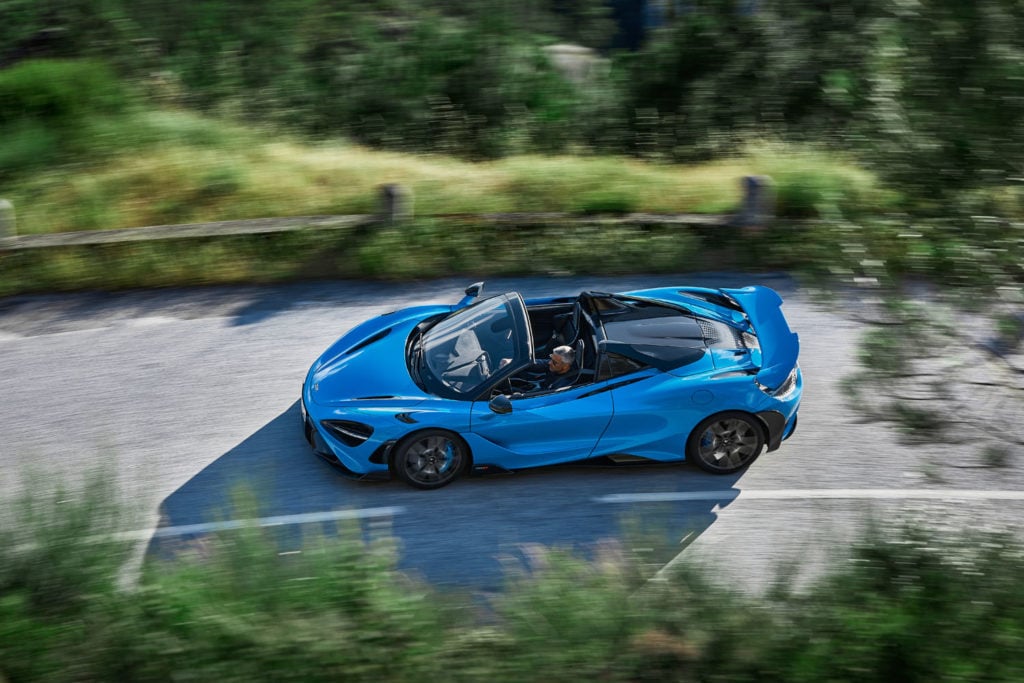 A McLaren 765LT coupe debuted in 2020 and immediately sold out; used versions of it are now selling for more than $483,000 (R7.3 million) or 40% over its original MSRP, according to a McLaren spokesperson. (This comes as no surprise.)

The Spider version debuted in Summer 2021. Only 765 of them will be made, with 40% of those headed to drivers in North and Latin America.

The 765LT Spider is meant for the track what with its bespoke “LT” springs and damper hardware and the widened stance between the front wheels in order to enhance grip on the road.

Not to mention the carbon fiber aero elements (splitters and diffusers and edges and fins) that optimize airflow around the car as it travels forward.

But this Spider does nod to the “nice for weekends” element thanks to some supple leather trim inside (better quality that McLarens of the past) and the single-piece retractable roof that not only drops in 11 seconds at speeds up to 31mph (50km/h) but also seals out road noise so expertly you could be forgiven for forgetting it’s a convertible at all. (I did.)

“Overall, this car is about drama – and it’s a little about lifestyle as well,” designer Robert Melville put it on a video call Feb. 16.

“It’s about exclusivity, more power and more performance. And, of course, how it excels on the track.” Hollywood Is a Verb

I did not drive the car on the track. But I did drive it to Hollywood, which considering the “lifestyle” component of the car, and the way drivers in LA use their supercars, was more telling.

On the way there, crawling through traffic on Highway 101, the 755bhp (563kW) engine and 4.0-liter twin-turbo V8 were under-used; I barely hit 60mph (97km/h) – and noticed a distinct rattle in the driver-side A pillar. (The noise disappeared as my speed increased.)

Despite the rattle, I was surprised to find that the 765LT was enjoyable even at these slower speeds, far more so than other track-focused cars that are so stripped down they buzz your bones over every bump and fray your nerves with the scream of their engines.

Instead, the 765LT has a cockpit that felt like slipping on a favorite glove; it hugged my shoulders and hips and proved intimate enough in its teardrop shape to allow the steering wheel to sit up close to my body like I like and facilitate conversation with my passenger without hampering headroom.

I even got a hat on in the cabin with room to spare – my go-to test for headroom in such vehicles.

The McLaren did not jump and jolt and grab the brakes with a demonic desperation, as many of these hair-trigger cars do at lower speeds.

Best of all, that bane of all supercars – visibility – proved amenable even to my more daring choices cutting through traffic.

It has retained the glazed buttresses of the 720 which aided rear visibility, and the well-placed side mirrors take care of the rest. (Front visibility was cut in half unfortunately when I flipped the sun-visor down to block that sun-drenched Hollywood glare.) 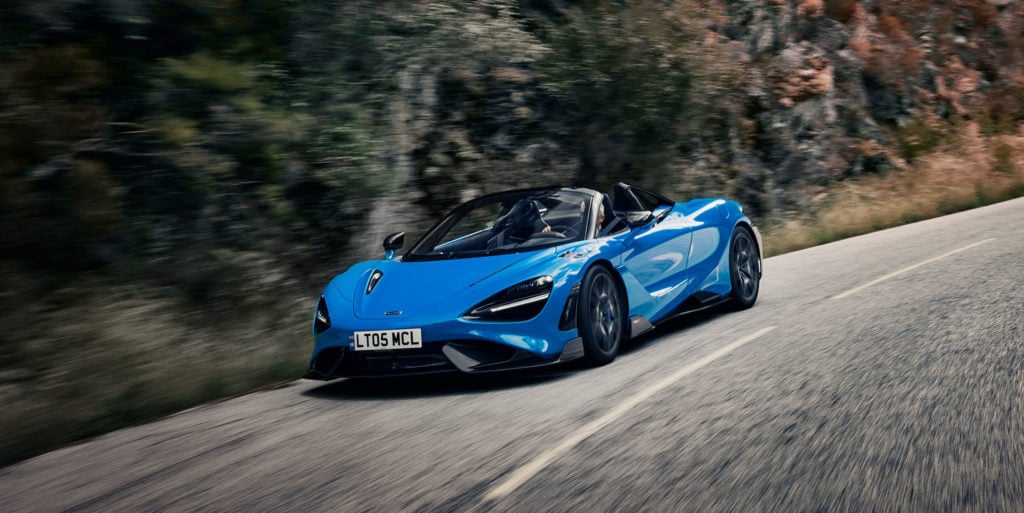 Then I drove home. Or flew – driving east meant no traffic to contend with.

With the throttle finally open, the 765LT Spider launched like a rocket bound for Mars.

After an initial pause to gather itself after I punched the gas, the car spooled forward so smoothly that its seven gears were imperceptible as they shifted and crested toward 100mph (160km/h).

The 765LT Spider fed the road back to me with unparalleled specificity. It engaged my mind and hands and back and feet with the wheels so well I felt like we were one single being working in unison. I have no doubt about its ability to utterly thrill and, under the right command, dominate when unleashed around a racetrack.

All told McLaren managed to save 176 pounds (80kg) on this compared to the 720 Spider. (On that same Zoom call, McLaren’s chief engineer credited a titanium exhaust system and all that carbon instead of aluminum, among other things.)

That is the difference between having a passenger and not. My passenger, for one, seemed happy with the results.

So was I. We whipped the rest of the day through traffic like two space travelers intoxicated on joy – until we realized we had to get it back into the driveway.

The McLaren 765LT Spider is one of those nice things that you shouldn’t have, if you can’t have nice things.

It requires time and consideration and sometimes getting your knees dirty to help it navigate the tight intricacies of daily life.

But if you have the bandwidth to drive it properly on the open road – and even better, store it at the track – its scalpel-precision, incendiary power, and exotic good looks will return the investment and then some.