The Hyundai Grand Creta has launched in South Africa, adding a new seven-seater to the brand’s Creta crossover series.

I got behind the wheel of the top-of-the-range Elite diesel model at the Creta’s local launch, taking the vehicle on a 150km round trip.

With an enjoyable driving experience and a host of standard features, this crossover is one to keep an eye on.

Going for a spin

Hyundai’s driving route took me on a variety of different roads and surfaces, with winding hills, straights, and even a brief go on a rutty dirt path.

The Grand Creta Elite’s 1.5-litre turbocharged diesel engine has an output of 85kW and 250Nm, and I was pleasantly surprised by the car’s performance for the most part.

The starting acceleration is impressive, and at one point I was even surprised by a bit of wheel spin when I pulled away at an empty intersection.

The engine feels responsive, too, and this is improved by selecting sport mode – which made a tangible, though admittedly not huge, difference to the car’s throttle response.

It also, rather gratifyingly, changes the appearance of the digital display dials from a cool blue and white scheme to a fiery orange and carbon-fibre appearance when switching between the drive modes.

Acceleration from 0-100km/h is listed at 10.5 seconds, which is about expected for a vehicle this large. However, at higher speeds, the diesel Grand Creta picks up pace a bit slower and you will need to plan your overtakes carefully.

The upside of the smaller, turbocharged engine is that it is quiet, especially for a diesel, and I only found the engine noise to be noticeable after around 4,000rpm. 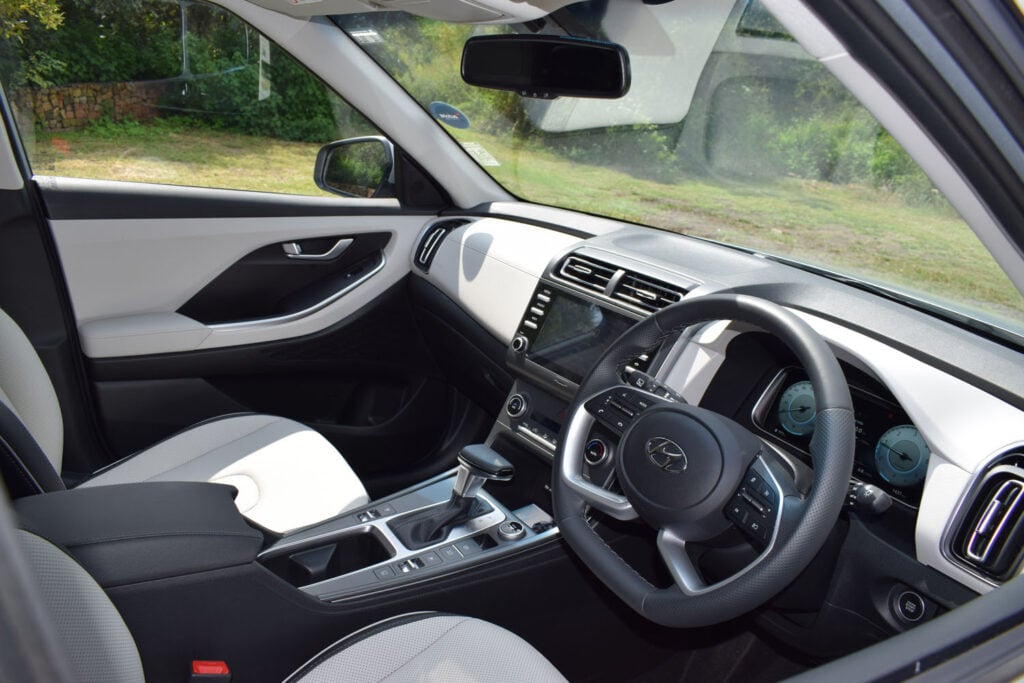 The Grand Creta also handles itself well, with a nice weight behind the steering and a smooth driving sensation that helped with swerving through pothole-infested roads with minimal discomfort.

Furthermore, I was particularly impressed with how the car handled itself off-road.

While the track it was on was by no means extreme, there were enough loose surfaces and stretches of uneven terrain to get a feel for its off-road handling.

Various off-road driving programmes can be selected, including mud and ice settings, but I went with the sand setting to account for the dusty track covered in stones.

With a ground clearance of 200mm the Grand Creta glided over smaller objects and bumps with no problems, and there was never any feeling of a loss of traction.

Overall, this Hyundai delivered a smooth and comfortable ride with decent acceleration in the lower end. At R560,000, the Grand Creta Elite is a higher-end offering in the crossover (a.k.a small SUV) market.

For your money you do get a lot.

This includes a two-tone artificial leather interior with a clean, modern aesthetic, a multifunction steering that feels great to use, and a really nice overall vehicle design.

The increased length of the SUV gives it better dimensions than the five-seater Creta it’s based on, and I particularly like the new car’s front grille and alloy wheels.

The features in the Creta performed well when put to the test.

The comfortable electric driver’s seat and height-and-reach-adjustable steering column allowed perfect adjustment to my driving position, the automatic climate control and ventilated front seats kept a pleasant temperature, a host of ambient lighting settings are fun to play with, and the wireless charging tray in the centre console kept my phone alive while I was using navigation.

I can also report that the crossover’s speakers were able to drown out the words of the passenger in the seat next to me.

However, I found myself making use of the rearview mirrors more than the reverse camera, as the low resolution made it hard to distinguish between the different surfaces it displayed.

Finally, when it comes to seating arrangements, the SUV can take up to seven passengers. Alternatively, you could always fold down the rear-most seats down for an impressive amount of storage space of 561 litres.

The Hyundai Grand Creta is in a unique position in the market, as it is more expensive than most crossovers, but cheaper than most SUVs.

For what you pay, the Grand Creta Elite delivers a solid driving experience, lots of space for passengers and cargo, and a liberal set of features that make it comfortable to live with.

It might not offer all the high-end equipment of the more expensive seven-seater SUVs on the market, but the Grand Creta is well worth considering if you want a family vehicle.