I recently had to part ways with my personal vehicle and made use of the many companies in South Africa that buy used cars directly from owners.

I compared six of these companies by selling my 2012 BMW 320d sedan.

This is how it went.

It only took a few minutes to complete AutoTrader’s Instant Offer application, and if there’s enough available data on your car, the platform will provide an immediate and rather accurate estimate of what you can expect to get for it.

Around one hour after first submitting my vehicle, I received email, SMS, and Whatsapp confirmation that it had been uploaded to the Instant Offer database.

This confirmation was shortly followed by a call from a company representative who asked additional questions and explained how AutoTrader’s selling process works.

Three hours after I uploaded my vehicle the Instant Offer bidding process began and ran for 30 minutes, and after this the final offer came through via Whatsapp, which was subject to an inspection of the sedan.

In total, it took under five hours for AutoTrader to get back with an offer.

GetWorth’s application process was equally as simple as AutoTrader’s and the company promises to get you an offer for your car within 24 hours.

The application took under five minutes and was promptly followed by email confirmation.

What stood out about GetWorth is that at the end of registration the platform provides you with an estimated retail price for your vehicle, rather than what you will be able to get for it.

I checked the retail value of my sedan and then listed it to get sold, but was informed via email that GetWorth does not buy vehicles over 10 years old or that have done over 140,000km, and mine was therefore ineligible.

This process took under two hours.

However, if your car doesn’t meet GetWorth’s requirements, it will ask your permission to show the vehicle to Motus-approved dealerships who may, on their own accord, contact you directly to buy the car.

Out of all the companies tested Sell My Car Quick had the shortest signup process, and immediately after registration, an email confirmation of the BMW being registered was sent to my inbox.

Four hours later a representative called to ask additional questions and said a buyer in the area would like to view my car. The company said it does not offer estimates without first inspecting the vehicle.

Half an hour later the buyer was at my door and the inspection took over 45 minutes.

He left after mid-day and said he will provide a final offer before five o’clock. The company didn’t make contact again.

From submission to the end of the inspection took around six hours.

WeBuyCars’ (WBC) application process is as quick and simple as the competitors’, and directly after submitting details and photos of the sedan I received email, SMS, and Whatsapp notifications confirming registration.

15 minutes later WBC called to ask a few extra questions, and two and a half hours after this a preliminary price indication came through via email and Whatsapp that showed how much the company was willing to pay for my car, subject to viewing.

I didn’t reply immediately and quickly received a follow-up call asking if I would like to take the deal forward, cancel it, or revisit it at a later date.

Weelee had a comprehensive application process as it already asked some of the questions which other companies call you for.

A few minutes after submission I received email, SMS, and Whatsapp confirmation that the car was now linked to my Weelee profile.

A Weelee representative called one hour thereafter to ask more questions and to determine if I want to list my car for sale or only find out approximately what I can get for it.

I listed the BMW for sale and it went through the dealer auction which takes place between 13h00 and 14h00 in the afternoon. Shortly after bidding concluded the final offer came in and I was given 24 hours to accept.

As the maximum offer was lower than others I already had I didn’t accept nor decline on the same day.

Weelee called again the following morning to ask why I had not yet acted. I said the offer was too low to which the representative said they will try to get a better deal.

The original offer expired, another day passed, and the morning thereafter a Whatsapp from Weelee came through that said it had a dealership that was willing to pay 9-12% over the previous “highest offer”, subject to viewing, which turned out to be the best price I received out of all the companies on review.

From submission to receiving the revised final offer took about three and a half days. 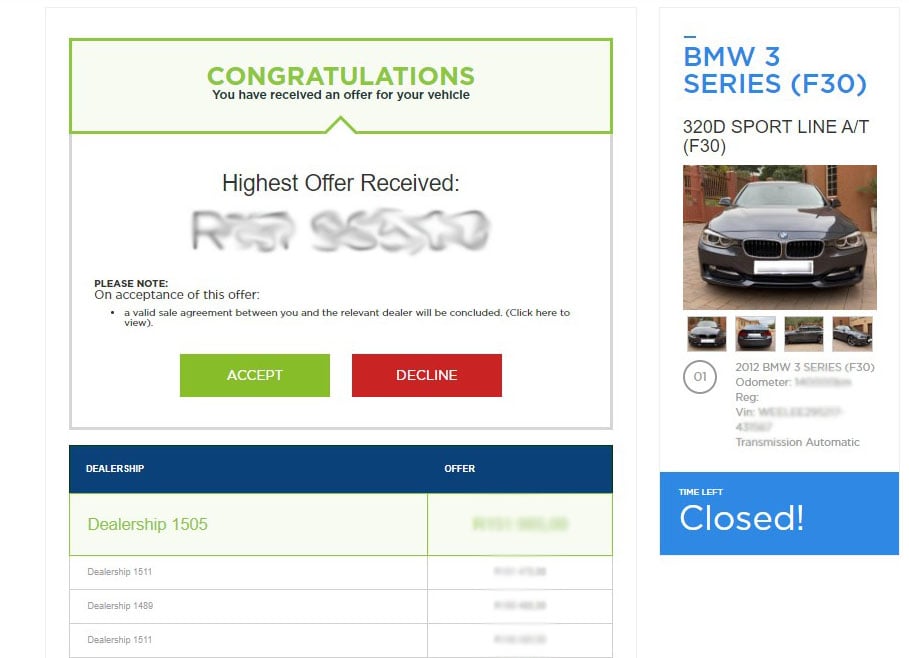 Wissle had the longest application process out of these car-buying companies, but it was by no means strenuous as it still came in under 10 minutes.

I immediately got an email confirming my account was registered, with the vehicle showing up on my user profile waiting to be validated by Wissle before going on auction to dealers.

Just over 27 hours after listing, the first email offer came in and I was given the choice to accept or decline it with no time limits imposed.

From start to finish the process took just over one day.

While almost all the companies delivered on their promise of providing me with a fair offer for my car, in the end, I sold my BMW to WeBuyCars as for me it was the most convenient to work with, the fastest to act, and it offered the best price upfront.

Less than one hour after receiving the initial offer a WBC buyer was in the parking lot taking a look at my car. The inspection took 30 minutes and by the end, the buyer said he will stick to the maximum price and that he was ready to shake hands on it whenever I was.

The next afternoon my beloved BMW was gone after seven wonderful years of ownership with the money transferred into my bank account the minute it drove away.

Over the weekend I kept a keen eye on the WBC website as I knew it won’t be long before my old sedan came up for sale.

Sure enough, I handed over the keys on a Friday afternoon at 16h30, the car was listed for auction on Saturday morning for a reserve price of 15% above what I got, and by Monday morning it had found a new owner and was no longer available.

In the spirit of fairness, it must be noted that AutoTrader was prepared to pay the same amount as WBC for my vehicle, subject to inspection.

Weelee’s revised final offer also came in 4% higher than that of WBC, subject to viewing, but slightly too late.

Nissan e-Power coming to South Africa - Everything we know

Hugely-popular Plant-Based Whopper from Burger King is back