Going into the test drive for the 2022 Audi e-tron GT last week, my main mission was to figure out how it compares with the Porsche Taycan.

After all, Porsche’s excellent electric sedan beat the e-tron GT to market by a year and will be, by far, its biggest competitor outside of Tesla.

The cars are built on the same electric platform with the same two-speed automatic transmission by the same parent company, Volkswagen AG.

Both command groups of brand loyalists while escaping the cultish fervor of the Musk-ites who troll anyone who speaks a word against their blessed leader … so let me speak no more about Tesla Inc. for now.

The e-tron GT has to be more than just a re-bodied Taycan with the four-ring badge slapped on the front, right? (That’s all anyone ever asks me when they hear I am writing about it.)

There had to be something more to it than that. As I drove up to the house in Calabasas, Calif., that was hosting the test drive, the question kept gnawing at me. I had to find out for myself.

Here’s what I knew before my drive through the canyons the Kardashians made famous: Even casual observers can see that the e-tron GT is more svelte than the Taycan, that its roofline is sleeker—in fact, it has  the lowest roofline of any Audi outside of the R8.

This aggressive stance is enhanced by 21-inch set wheels cut like blades and brilliant LED headlights that are rimmed along the inside in electric blue.

A red rear taillight spans the entire back side like a rapier. The e-tron GT’s side is split by a carved vent in the front and a suggestive bulge in the rear over the wheels.

A panoramic glass roof comes standard on the base GT; higher-tuned, more expensive RS versions come standard with a carbon fiber ceiling (on those, the glass roof is optional).

The message here is futuristic cool. Parked next to each other, the e-tron GT looks like the Taycan on a keto diet—shredded. But even though the exterior is fresh, the interior remains familiar: It feels like every other Audi I’ve driven in recent memory.

That was the biggest thing that hit me when I jumped inside with nary a directive from Audi staffers on how to operate this electric machine, other than a simple, “Key’s in it.”

I didn’t need any directions, anyway. This, I think, will be welcome to the Audi faithful, who come to the car simply because they trust the brand. (Audi expects they’ll account for half of the e-tron GT buyers, the majority of which will be in the U.S.)

If you loved Audi interiors before, you’ll love them now, too.

The most notable new element in the e-tron GT is the Tic Tac-box-size “shifter” that moves the car from neutral to reverse or drive.

Otherwise the car remains minimal, with fewer computers and touchscreens than in the Taycan. The car lined in warm matte wood accents along the doors and dashboard or, optionally, carbon fiber trim throughout.

The back seats come clad in premium leather or, if you wish, animal-free fabric made from used plastic bottles and fishing nets with the look and feel of cashmere.

The seats feel smaller than those of the Taycan but ample enough for three adults—in fact the rear footwells have been sunk into the floor for several more inches of head- and legroom.

The ceiling throughout is high enough for taller drivers like me. Rear visibility remained unobstructed any which way I turned. The trunk is spacious enough for bags on a weeklong getaway.

All in all, the e-tron GT is deceiving with its sharp rooflines and low stance: It is downright comfortable, even livable, inside its confines.

I drove the Audi RS e-tron GT, so for the rest of this review I’ll focus specifically on that. It has a top speed of 155 mph and a  zero-to-60-mph sprint of 3.1 seconds.

Under nonaggressive driving, it has a range of 232 miles on one charge, and it will charge from 5% to 80% on a 270 kW charger in 22.5 minutes, according to Audi-provided stats. None of that crossed my mind as I floored it up Cold Canyon Road. I was more enamored with how the car felt.

With all-wheel-drive, that infallible instant-torque transmission, and available rear-wheel steering, it was a mind warp.

The rig felt as tightly wound as exotic cars that cost twice the price, but with more of an adult sensibility—far less drama—thanks to just the noise of the road and the low tones of the Audi-fabricated motor drone, rather than the burping and belching that combustion breeds.

Surging past vineyards and valley ranches, I felt like I had somehow broken a minor law of physics discovering the car’s instant-steering response and perfect weight balance.

The car hugged every curve, especially when I dipped downhill over the kind of uneven pavement that’s had other cars I’ve tested bottom out or wiggle at high speeds.

Acceleration was good enough to give the Audi SUV leading my drive a healthy head-start, and then I caught it in a second.

The Audi RS e-tron GT was fast enough to hit 110 mph on a short straight heading toward Topanga State Park. It let the car jump to triple digits like a rocket.

Meanwhile, the carbon ceramic brakes were so absurdly responsive that approaching some of those hairpin turns they boosted my confidence to a level which can only be described as unhealthy for someone who’s yet to start an IndyCar race.

I drove most of the way in Dynamic mode, which is code for the most aggressive steering, stopping, and accelerating available.

Comfort, Efficiency, and Individual modes present other options for drivers who want to conserve battery life or tailor the performance of the car—how aggressive the braking feels, throttle response, the stiffness of the suspension, the weight of the steering wheel, etc.—to specific conditions.

The Joy of the Drive

Here’s the most telling part for me, someone who drives for work and has neither desire nor need for gallivanting in the rain on a Lewis Hamilton-wannabe joyride: Halfway through the test drive, Audi’s on-site techs asked if I wanted to keep going or turn back.

I pushed for more seat time. I just wanted to have more fun. Driving the RS e-tron GT feels like the future of sport sedans, and that’s an exciting future to contemplate. 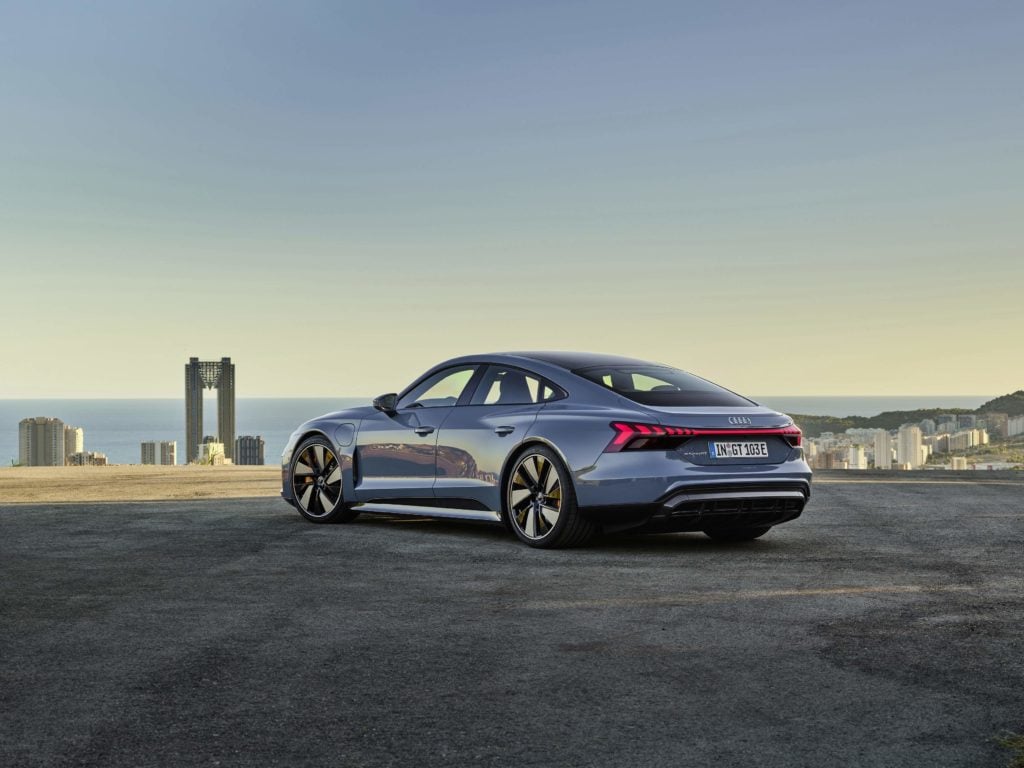 I had the same feeling when driving the Taycan. The Tesla Model S is fun to drive, too, but feels more computerlike than the Audi or Porsche.

The first time I drove an early Model S, in 2012, Elon Musk himself joined me.

I couldn’t quite grasp why he kept saying that in the future, cars would be like big computers, fully synced with every other device we own and able to download software directly, like a cellphone.

Now, of course, it makes complete sense and shows just how far ahead a thinker Musk is. His cars embody that vision. But I digress.

Does that thrill make the RS e-tron GT a better choice than the Taycan Turbo? On paper, it’s less expensive (by about $12,000), with nearly comparable driving performance and a longer driving range.

The mighty Taycan Turbo beats it on space, horsepower, and raw speed; it also maintains the forceful allure of Porsche’s brand, with a performance I called “intoxicating” and “revolutionary” when I drove it in 2019.

And the Taycan Turbo can be had now, while deliveries of the e-tron GT won’t start until June.

In a way, the two cars complement each other for the benefit of everyone interested in a future of cars that actually involves some emotion, a future that’s about something more than just four-wheeled appliances moving from point A to point B.

Like the old saying goes, a rising tide lifts all ships. I still suspect that for most people the choice between the Audi e-tron GT and the Porsche Taycan will come down to simple brand preference.

Either way, I predict you’ll be excited to hit the road.

What the colour of your car means for its resale value