The new Toyota Corolla Cross will arrive in South Africa in November, with the range-topping hybrid model coming in at R448,300.

This puts the “small SUV” in direct competition with VW’s best-selling T-Cross in its Highline R-Line trim, which also sells for R448,300.

As the competition for best-selling car brand in the country between Toyota and VW is now more heated than ever, these little SUVs will have a big battle on their hands once the Corolla Cross hits the market.

Toyota paid close attention to crossover trends with the development of the Corolla Cross, as it offers a comprehensive feature-set that manages to one-up the competition in most categories.

In addition, an 8-inch touch display in both provides Apple CarPlay and Android Auto support, along with VW WeConnectGo and Toyota Connect online services.

A few finer details set apart these little SUVs further, such as the T-Cross offering ambient lighting and paddle shifters, while the Corolla Cross offers keyless entry and start, and a reverse camera. In the safety department, both the T-Cross and Corolla Cross come with hill-hold assist, all-round parking sensors, and six airbags – while achieving 5-star crash scores from separate branches of the NCAP organisation.

This is also where the Corolla Cross pulls firmly ahead, as it brings lane keep assist, a blind-spot monitor, and a pre-crash system as standard – while the T-Cross gains a driver fatigue monitor only.

With the pre-crash system, your Corolla Cross automatically scans for obstructions in the road and warns the driver both audibly and visually in the case of an imminent accident, and provides brake assistance if needed.

It is worth mentioning that nearly all of the Toyota’s equipment can be fitted to the VW at an additional cost, while no extra features can be optioned on the Corolla Cross. The VW T-Cross Highline is driven by a 1.0-litre, turbo-petrol engine that develops 85kW and 200Nm.

In this specification, it pairs to a seven-speed, dual-clutch automatic transmission that assures a sprint to 100km/h in 10.2 seconds.

A top speed of 193km/h is achievable, and combined fuel consumption is rated at 5.3l/100km.

Powering the top-end Corolla Cross is a petrol-hybrid drivetrain with a total system output of 90kW. This figure is attained by combining its 1.8-litre petrol motor’s 72kW and 142Nm with an electric motor that produces 53kW and 163Nm.

The total output does not equal the performance of the two engines put together, however, due to “transmission reduction losses”.

A dedicated EV mode is also available with this configuration, where operation is fully-electric and aimed at situations such as peak-hour traffic.

A noticeable size difference between the two also contributes to the Toyota supporting a larger standard cargo capacity of 440 litres, compared to the VW’s 377 litres. 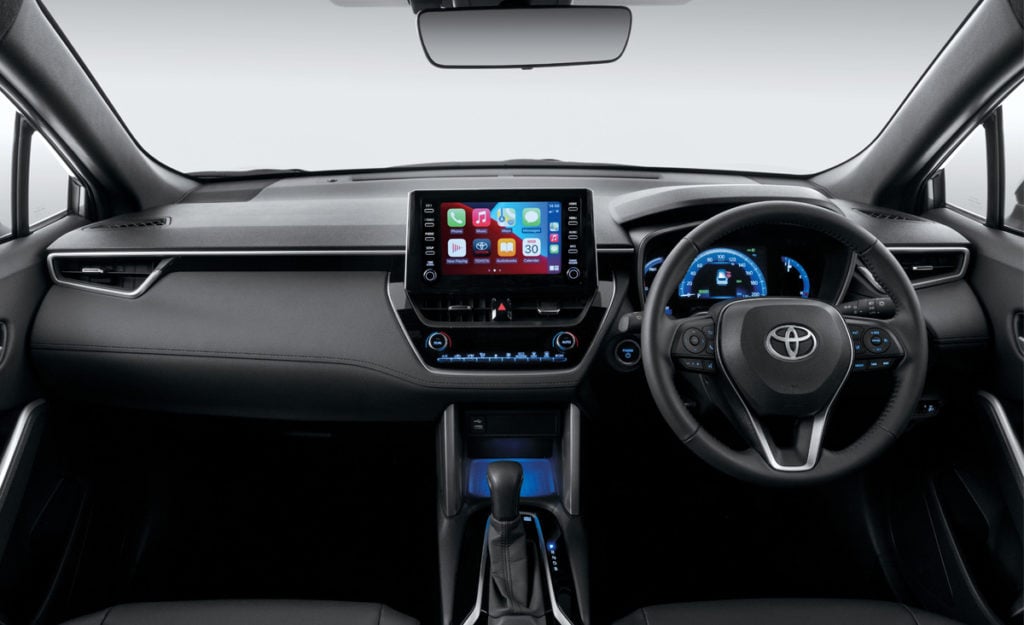