Toyota Corolla Cross – This is going to sell like hot cakes It is no secret that Toyota has a lot riding on the Corolla Cross.

The SUV launched in South Africa this month, and I was fortunate enough to spend time behind the wheel of both the petrol and hybrid models.

Toyota is already a strong contender in the popular SUV space with the large Fortuner, the compact Urban Cruiser, and the CH-R and RAV4 filling the ranks in between.

But, there’s a niche for a premium SUV straddling the B (smaller, more affordable) and C (premium, mid-size) segments, which Toyota is betting on to the tune of 20,000 units per year.

With a starting price of R349,000, the Corolla Cross is right on target. 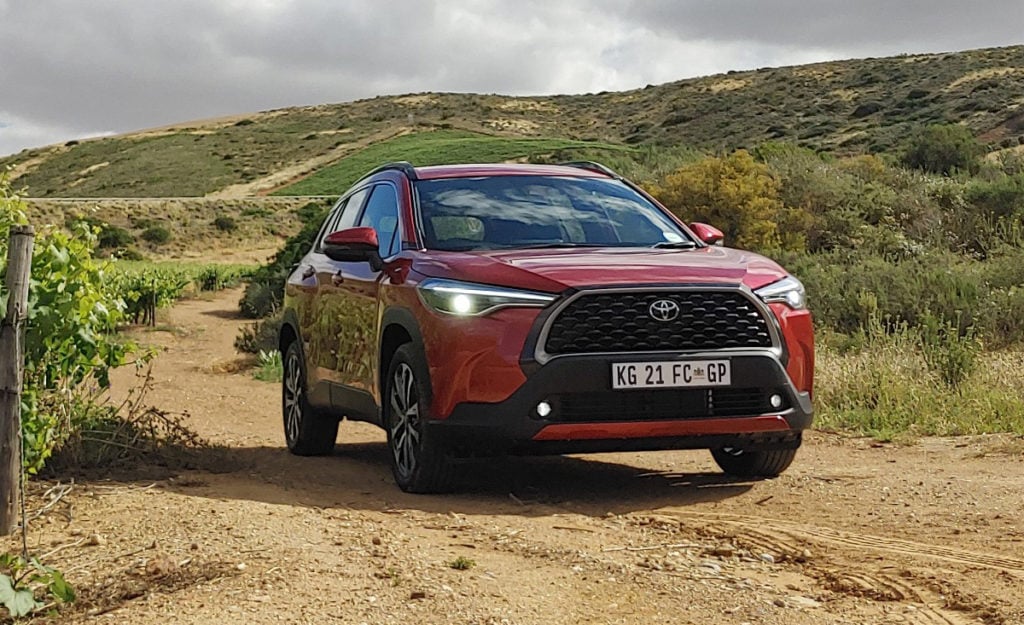 The market the Corolla Cross is targeting is so promising that Toyota is producing it right here in South Africa.

The SUV is built on the Toyota New Global Architecture-C (TNGA-C) platform that underpins several new Toyotas, including the Corolla, CH-R, Prius and Lexus UX – making the Corolla Cross cheaper to produce.

This Toyota has the Haval Jolion, Kia Seltos, Hyundai Creta, and VW T-Cross firmly in its crosshairs, and what it has going for it is a no-fuss engine line-up and a comprehensive list of standard comfort and safety features.

Despite the Corolla badging, the Corolla Cross bears little resemblance to the edgy hatchback or sedan on the outside, although it does share the same 1.8-litre petrol and hybrid motors, as well as the interior. Regardless of the model grade, the Corolla Cross is a good looking SUV with a high level of comfort and specification.

All models sport a good CVT gearbox, too, and while there is an all-wheel-drive version in some international markets, South Africa will only get front-wheel drive options.

The drive then is smooth and comfortable in both the petrol and hybrid versions, while the interior feels spacious and airy – as Toyota has not fallen for the high waist and low roofline design language like some of the competition.

All models are comprehensively equipped and offer Android Auto and Apple CarPlay, and Toyota Connect. The first 100-odd kilometres I drove in the new SUV were in an entry-level hybrid Xs model. Priced at R413,000, it is the cheapest “new energy vehicle” on the market.

The hybrid Corolla Cross pairs a 72kW, 142Nm, 1.8-litre petrol engine with a 53kW and 163Nm electric motor for a total system output of 90kW – which is delivered to the wheels via a CVT gearbox.

These numbers do not tell the full story, though, as the Corolla Cross delivers power in a way that belies what they suggest – and it feels far stronger.

As with Toyota’s other hybrid engines, the petrol engine shuts off when lifting off the accelerator, and pull off from a stop begins in pure EV mode with the full torque figure available from standstill.

The hybrid is also brisk yet frugal, consuming only a claimed 4.3l/100km in the combined cycle.

It’s built for commuting and loves traffic, as I found out inching through the infamous Cape Town traffic jams running on pure electric drive.

As speed increases, the petrol engine kicks in and overtaking when the road opens up feels more steadfast with the petrol and electric motor working in unison – giving an instant boost in power.

On deceleration and downhills, the engine shuts off completely and uses the regenerative capabilities to charge the batteries.

Subliminally, I found myself doing whatever I could to keep the charge up, further improving fuel consumption.

Smart brains over at Toyota did the sums and calculated that the extra cost of the hybrid drivetrain (R24,000) over the petrol engine will pay for itself in around 24 months or less (at the current fuel price), after which it begins saving you money on fuel spend to the tune of approximately R12,000 per year. The final stretch of the test drive was tackled in the range-topping Xr petrol model, with 103kW and 172Nm available.

The drive is much the same – although, without the fancy hybrid info display, it felt a little less unique.

The power delivery is not stellar, but not sluggish by any means. It cruises along comfortably in town and at highway speeds, and when the opportunity comes to overtake, it is not a case of having to have a bit of a “run-up” to do so.

The hybrid, in my opinion, is therefore the better drivetrain.

It’s important to note that previously hybrids were not rated for towing, which put many buyers off.

The Corolla Cross hybrid can now tow up to 400kg with the optional towbar fitted – which makes it an attractive lifestyle vehicle.

With three shades of white, two shades of silver, black, red, and blue available, there is also a host of styling options to add personalisation, too. Toyota has invested a lot in the Corolla Cross, and I believe it is going to eat into the competition.

Being locally produced and with enough supply of semiconductors to avoid any foreseeable stalls on the production lines, I don’t think it will be long before these become as popular as the Hilux.

Many competitors require some sort of compromise, whether that be in the brand, the specifications, or the technology.

Toyota, however, has pulled off a masterstroke in packaging this SUV.

It is a good car from good brand, with a good dealer network and competitive pricing.

There’s very little that could dissuade me from recommending this to anyone in the market for a family-sized lifestyle vehicle.